Your shopping cart is empty

All photos, articles and contents are mine, unless otherwise specified. ﻿ 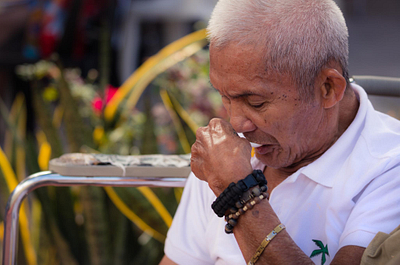 Disclaimer: Although based on a true story, the photo is only used to depict someone who has a left side weakness and is NOT the actual patient. I wrote this back in April 6, 2011 - one of my most memorable days working as a registered nurse in the Kingdom of Saudi Arabia.

My 52-year-old patient left the hospital after 9 days of conservative management. He was admitted with left side weakness secondary to brain hematoma which he acquired after he accidentally fell down from home 5 years ago. When I first saw him, he was barely moving and he talked like he was eating his words. The doctor placed him on Dexamethasone 8 mg IV thrice a day along with some other anti-hypertensive drugs. He was not diabetic but there was an order to check his blood sugar every six hours for a possible manifestation of latent diabetes mellitus from glucocorticoid therapy. CT brain was done supporting the admitting diagnosis and physiotherapy BD was also started.

In a surgical ward, medical cases as such are always a stand out. A patient post tonsillectomy would ask when he could eat. A patient post endoscopy would ask when he would be discharged soonest time possible. A patient post cholecystectomy would ask how big the gallstones were in his gallbladder and how long it would take for the wound to heal. Call bells are usually from consumed IV fluids, constant longing for pain killers, urge to urinate and/or pass stool, and the non-stop search for the doctor as if some instruments were left inside of them. But a call bell from a patient who has a left side weakness would mean staying with the patient almost every minute of your shift.

A lot of my co-staffs were becoming impatient with him but I was able to develop a strategy specifically for such type of patients who would press the call bell almost as frequent as they would blink their eyes and demand urgent response. Communication and cooperation are two of the most important aspects in this plan of care. First, I let him realize that he isn’t my only patient of the shift. This way he would understand that I’m not simply sitting in the station waiting for him to hit that bell. I am caring for other people as much as I am caring for him. Second, I told him, I am just like one of his sons and he’s just like my father. We should work together, in the same direction, give and take.

Then I gave him the scheme. I told him what time I start for work and what time I would finish. That way he wouldn’t pass stool five minutes before my shift ends and expect me to clean his ass with a bright smile on my face. I told him after checking his blood pressure and temperature, or after serving his food, that I would be doing the same to at least four or five other people and that I would get back right to him hopefully in time after he would finish his meal. I told him when he would take a bath, and that at that same time he has to urinate or defecate, not before, and especially not after the bath was given. And I told him the busy times on the ward i.e. doctor’s rounds, medication times, endorsement period, lunch time etc. That way he would understand that there might be a delay in answering his calls but he is never neglected. I would always inform him where I would be going.

On his third day of stay, his condition had a significant improvement. Dexamethasone was reduced to twice a day, and a repeat CT showed a slight decrease in the temporal hematoma. At this time, he was now able to support himself with his left hand whenever he would be transferred to a chair or to a commode. During bath, he would smile at me whenever he would raise his left hand so I could scrub his underarm. His left leg was still weak though but you could see him trying to move it a little over to the side so I can wash his private part and do perineal care.

On his sixth day, he was getting Dexamethasone once a day and he became remarkably better. He could already walk from the bed to the toilet, with a one-man support (as small as I am would do). He could eat by himself as long as you serve him the tray (unlike before when you really have to spoon-feed him). And he would smile a lot now and ring the call bell less often, not because he had lesser needs but because he knew I would pass by his room whenever I get the chance just to check if he needed anything.

Today, I gave him his last full bath after receiving the order of discharge. I was staring at his smile while I was cleaning his underarms. He was playing with both his hands in the air and he was particularly looking at his left arm which he could now raise as high as his right arm. Probably his smile was saying “See, I can now move my hands again” or “I hope I continue to get better so I could soon walk again on my own” or… maybe he was saying “Thank you for not giving up on me.”

When the check out was completed, I put him on the wheelchair and assisted him and his brother to their car. I said I wouldn’t look back but I did and I saw him waving goodbye as the car drove away. It was 3pm when I got back to the station and the incoming afternoon shift had already arrived. The physiotherapist of my patient was there checking the files and he asked me, “Has 3109 (his room number) left?” I said yes and he told me, “You know, the patient loves you a lot. He’s telling that to every single person coming in his room. He even said, he hopes all nurses are like you.” I went back to his room and for a moment I stood there like a statue thinking, “Some rooms will never be the same again.”

Let me just close this by sharing a simple nursing idea which is pretty much fading nowadays. Nursing care is not only seen in how well you complete your paperwork, how fast you move in the ward, how high the grades you get in exams, how perfect your attendance in all hospital lectures, not even in how well you master all nursing concepts probably even more than anyone else does. If you want to know what kind of nurse someone is, simply look at his patient. A patient wouldn’t care how much you know, until he finds out how much you care.